A very important part of Python is list comprehensions. They will come up again and again in any example you see online, so I thought I’d go over them separately. They are technically not a part of Numpy, but I’ll introduce them here, for reasons you will understand.

Move to the Plotting folder and open up list_comp.py.

The new thing here is we are importing numpy. We import it as np to save typing numpy each time. This is a common pattern in Python, though it is optional. You could just import numpy as it is.

We initiliase x with five values, and y as an empty list. What we want to do is fill y with the values of x divided by 5. The boring way, the way you’ll most likely use if you come from a C/C++ background is:

We print the values. The only new thing here is the format() command. The values to be printed go inside {}, and the actual values go inside format(). Here are the results:

But this method is not how it’s done in Python. There is a much easier way called list comprehensions.

List comprehensions are used when we are working with lists. One of the most common tasks is to take a list, do something with it, and create a new list. Because this is so common, an easy way to work with lists was created, rather than having to loop all the time.

So for our example, where we want to divide x by 5:

We use a new variable z. Let’s break the list comprehension:

This is our normal for loop. We loop over all the values in the list x.

For each value n in x, divide n by 5. The square brackets ([]) will convert it to a list.
If you compare it with the previous example, you have replaced three lines with one. And this is a very simple example.
As a simple rule, any time you want to work with lists to form lists, use list comprehensions (unless a better way is available, as we’ll see!).

But why can’t you just divide x by 5 directly? Let’s try it:

This is the Python try-except block. It tries to run your code and if it finds an exception, it hits the except block.

In this case, you can’t divide x by 5, so you will hit the exception.

Well, actually you can, as long as you use numpy arrays.

We convert our x to a numpy array with the np.array command. And now, we can directly divide a by 5.

Try out the code now and see the results. Play with it if you like.

Plotting Sin and Cos waves

Okay. Let’s plot some sine and cosine ways. You all remember the formulas from school right? No? Then get out of my class.

Just kidding. You don’t need to remember formula’s. That’s what Python is for, right?

In this example, we are going to plot a few simple sin  and cos graphs, getting an introduction to Python’s plotting library, Matplotlib.

The new thing is: import matplotlib.pyplot as plt. We are importing it as plt to save typing. Another thing to note is: Matplotlib is a huge library. We are only importing the pyplot part of it. This is useful to save memory and speedup code. Otherwise you’ll be importing gigabytes of libraries everytime you want to print Hello World on the screen.

Okay, let me remind you what I said earlier. Learning to use Python well means using a lot of libraries and functions. But you don’t have to remember them all. I still forget simple things like how to read files. Learning how to Google is one of the most important part of being a software engineer.

With that in mind, I’m using the numpy linspace function. And yes, I misspell it as linespace every single time.

Anyway, linspace generates evenly spread out values. In the example above, it will generate 1000 values between 0 and 20. Printing  1000 values will take a lot of space here, so let’s see what happens when we generate only 10 values:

As you can see, it has generated 10 values evenly spread between 0 to 20.

The numbers are floating point by default, which is good for us. Coming back to our code:

We take our x and calculate sin and cos values for it. Now to graph it.

The first two values are the x and y axis values.

The third value is the color. “-g” for green, “-b” for blue. You can also have “-r” for red, and Google for more. Finally, we have the label, which will show up in the legend. Speaking of legends:

We want the legend to be on the upper right corner, which in Matplotlib uses the simple English terms “upper right”. Can you guess what the instruction would be if you wanted it on lower left?

The first part is optional. The graph looked too squeezed, so I set the limits of the y axis to be between -1.5 and 1.5. Try to comment out the code and see what happens.
Finally, we show the graph. 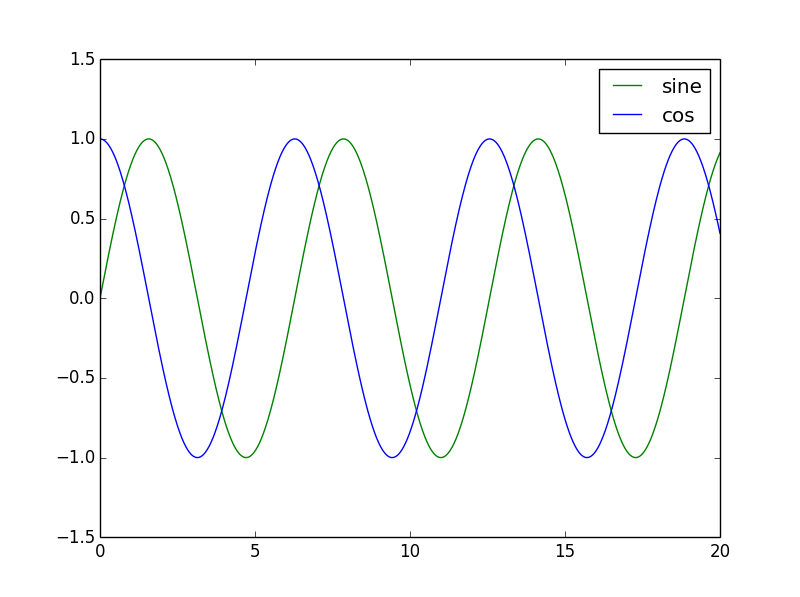 Note the legend on the upper right corner, with the right labels.

In this exercise, we are going to read data from a file and plot it. I have two files: names.txt that contains names, and salaries.txt that contains, surprise, salaries. Let’s look at the files. I’m using the Linux cat command which just prints the file contents on the screen.

Nothing new here. Let’s go ahead.

One of the main feature of numpy arrays, that makes them so much better than normal Python lists, is that it allows different types of number data types.  Python lists are normally used for strings. While they can store numbers, they aren’t really optimised for numerical processing.

Numpy arrays are. You can store data as 8, 16 or 32 bits. You can choose to use integers or floats. Numpy handles all the conversion and processing internally.

In the line above, I’m setting dtype=int. This tells numpy that this is an integer. You could use int8 for 8bit, int16 for 16bit, uint16 for unsigned int 16 bit and so on. All the possible options are available in the documentation online. Just search for “numpy dtypes”.

I just use an int, as I don’t particularly care for this example. The last line in the instruction is sep=”,”, which tells Numpy that the data in the file is separated by commas. The data is in this format:

It tells Numpy to separate the data in the array by commas. If the data was like this:

Now we are reading names. The np.fromfile() function doesn’t work so well with text, so I’m using the genfromtxt function. It is similar to the previous function.

The dtype is string. delimiter is the same as sep in the previous example.

Now we need to plot the names vs the salaries. A small detail. You can’t really plot the names on the x axis, as the x axis has to be a number (actually you can, as you’ll see in the later chapter on Pandas. But I’ll show this method for now, as it stumps a lot of beginners). However, you can work around that.

The first thing you do is create a variable called x that will contain numbers for each of the names:

The numpy arange (take care, it’s arange not arrange) generates a list of numbers starting from 0.

In our code, x contains a list of numbers from 0 to the number of names.

So we plot x vs salary. We are using a bar graph here.

This line uses something called xticks. All it does it is replace the numbers in x with names. Because we can only plot against numbers, we had to use this round the way approach.

We set the x and y labels here, as well as add a title. We finally display the graph.

I have added this line just to show that numpy supports many functions like max and min (the maximum and minimum values in the array), average and median. If you are looking for a special mathematical function, it’s always worth Googling to find out if it already exists.

If you look at the graph above, you will realise there is a problem. The upper two values are so large, they are suppressing everything else. We can’t get clear results from the graph. And this gives me a chance to show you another cool feature of Python. Firing up the Python interpreter:

We create a list a that contains values from 0 to 4. Now, you know you can see any one element of a list by doing something like a[2]. But you can also do:

This says, starting at the 0th element, show all elements up to the second. Hence we get 0, 1.

We can also do:

Starting at the 2nd element, show all elements after that. Hence we get 2, 3, 4.

The general format is:

Either start value or end value can be empty, in which case it will start at the beginning or go to the end, respectively. We can also give both values:

This says show elements between second and fourth position.

The rule is that the start element is included, while the last one is excluded.

Now here is the interesting thing:

What does -1 mean? Since the list starts at zero, -1 is the last element. -2 is the second last element, and so on. In the example above, we are saying starting from 0, show all elements up to the last. We can do it the other way too:

This time we only get one element, as we started at the last one to begin with.

This trick is very neat to get rid of values at the beginning and end. Sometimes, the first few and last values maybe garbage, and you may want to get rid of them. This is how you remove the first and last element:

We will use this trick to get rid of the lower two and upper two values in our data. This is a normal technique in statistics to remove extreme values which may be interfering with the results.

The rest of the code is the same as before: 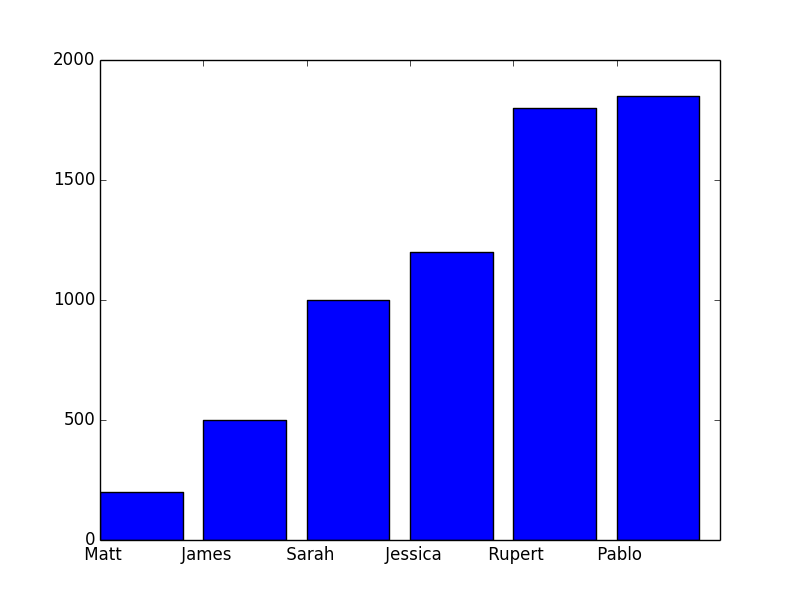 This time, the graph allows for better comparison.

I heard about the Cloud challenge some time ago and liked the idea-- of building a practical project to show you Cloud/AWS knowledge. The challenge just builds a simple online resume, which is fine as the challenge is aimed at complete beginners. I decided to go one step ahead